I’ve had a hell of a time deciding which band to profile of the dozens of great Bay Area punk bands of the early 1990’s.  Both sides of the Bay were having a explosion of talented and prolific musicians that played in an incestuous web of bands.  It was never, “Is there a show tonight?”, but “How do we decided which show to go to tonight?”  There was a distinctive pop punk sound, but this would included an extremely wide range: the melancholy last-night-on-earth rasp of Jawbreaker, the Beatles LP played on 45 speed reverb of the Ne’er-Do-Wells, and the self-deprecating geek rock of Mr. T Experience who never seemed to sing a serious line.  And, of course, there was Green Day, which didn’t seem to be any particular stand-out until suddenly they were, propelling the entire Bay Area scene into the world’s spotlight.  Green Day has shown to have staying power (which is a mystery to me.  Seriously, I don’t begrudge their fame or longevity, I’ve mostly grown out of the punk rock contrarian impulse to hate the band everybody else loves most, but a few months ago I caught a glimpse of the Teen Choice Awards and the kids were going nuts for Green Day.  Most teenagers now probably were introduced to Green Day by their parents, so is it possible that they still be cool? [how old did I just make you feel?  I just grew like two inches of ear hair just writing that], but all the other bands are long gone, or at least only pop up every few years for a reunion show.  Blake from Jawbreaker seems to come out with a new band every year now, but even at their best they are only appealing for the wisps of Jawbreaker’s ghost.  I’ve see Dr. Frank of Mr. T Experience on Piedmont Ave quite a bit, sometimes typing on his laptop with a beer, so I assume he’s working on his successful series of young adult novels, the first of which is called King Dork. 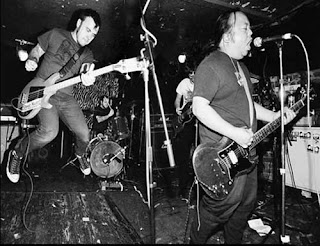 J Church was a San Francisco band (hence the name after the Muni light rail line) that started in 1992 out of the ashes of another solid band, Cringer.  I hear so few people ever talk about J Church anymore.  They were political and had a vaguely crust punk aesthetic, but they were also melodic, funny and sweet.  Front man, Lance Hahn had a knack for vivid imagery that always made say, “I know somebody just like that” or “I’ve been to those type of parties before.”  Unfortunately, he succumbed to a long struggle with kidney related problems in 2007.  A few years before that I bought a bottle of whiskey from him without realizing it at a liquor store in North Beach.  It wasn’t until we got outside that my friend said to me, “Dude, that was Lance Hahn!”  I had seen him play a few times in the 90’s, but you don’t expect to see your high school heroes in such common place settings a decade later.  Punk rock is awesome like that.
This is “Tide of Fate” off a 1993 EP that I still listen to on a regular basis:


Okay, after talking about Mr. T Experience I put on one of their records and now I can't resist a bones track.  Also from 1993, this is "Even Hitler Had A Girlfriend":
Posted by Michael B. Burton at 5:42 PM