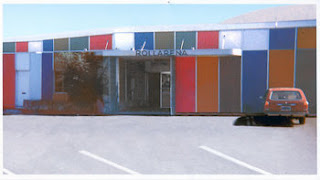 Today I did an interview for a separate project with the legendary East Bay promoter of the Teens N' Twenties rock and roll shows, Bill Quarry.  Bill put on shows from the late 50's to the early 80's at many different venues with acts ranging from Fats Domino to Neil Diamond to the Yardbirds to Michael Jackson (he as even in charge of concessions at the infamous Altamont Speedway concert), but his most successful venue by far was at the Rollarena in San Leandro.  There local bands got to play with their heroes at shows for kids that cost no more than $2.  I got a bunch of flyers today for shows at the Rollarena, and three of them showcase a Fremont band called Peter Wheat and The Breadmen playing alongside The Byrds, 13th Floor Elevators and Them.  In 1966, Peter Wheat and The Breadmen were supposed to be the opening act for the Beatles at Candlestick Park in what turn out to be the Beatles' last live concert, but there was a conflict between the East Bay's musician's union and San Francisco's and they couldn't play.1  I know!  Talk about your bummer, man.
Here is their video for their 1966 song, "All the Time" with the insanely gorgeous British actress, Judi Huxtable.