The Bait Shop with Bar Stools- The Kingfish Pub, Oakland 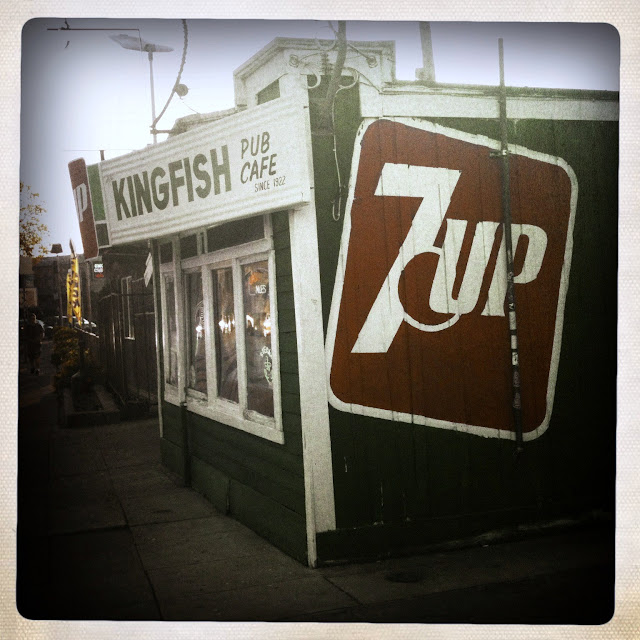 The Kingfish Pub in Oakland is a green shed of a bar that I’ve admired for years every time I went to DMV, which is the only reason most people are on that stretch of Claremont Ave, just north of Telegraph.  Though it took years until I actually went into the bar, I always found its sheer old-schoolness impressive.  While the neighborhood around was tearing down wood and brick and putting up stucco and concrete, the Kingfish was obviously being kept alive by some loyal tribe of some regulars.  I had no idea how right I was or how many threats to the bar had faced in the last decade as Temescal has been growing exponentially hip.
I started going into the Kingfish about six months ago and moved in about ten blocks away about a month ago (I, of coarse, am not one of those hipster dorks who moved to Temescal because it was cool, I just happen to look a bit like those dorks and I like all the same restaurants and shops those dorks also like).  When I’ve told people about my historical bar project many people (including a librarian in the Local History Room at the Oakland Library) told me that I need to write about the Kingfish.  I explained to them all that I like the Kingfish, but it seemed a little too low profile for this.  Sure, it was a great bar, looked awesome and had some history, but which canonized writer blew entire book advances there?  Then I came across an article in the San Francisco Chronicle about how the Kingfish was applying to become a historical landmark.1  If looking into what makes neighborhood bar into recognized historical landmark doesn’t fall into the purview of this blog, then I’m not doing my job.
The Kingfish opened in 1922 as a bait shop for fisherman when Claremont Ave was one of the few thoroughfares between the Bay and the Delta.2  The Temescal neighborhood was a major commuter hub in the 1920’s in the web of a Key lines (the Key System was a network of street car lines that are a noble slice of East Bay history in of itself worthy of a whole book or blog) and the beginning of the Sacramento Northern railway that ran from Shafter and 40th Street all the way to the city of Chico3.  I was surprised to discover that Temescal had once been it’s own village, founded in the 1860’s with undelineated boundaries, wedged between Oakland and Berkeley.  It was incorporated into Oakland in 1897 and right at the heart of the city’s defining demographic shifts in class and race.4

Within a couple years of the Kingfish opening it acquired a room in the back (where a shuffle board table and bathrooms now stand), which served as a casual beer-only speakeasy for the fisherman.  Evidently, nobody questioned why a bait shop should have need of barstools or why its customers would be in there for hours buying bait.  After Prohibition officially ended in 1933 the Kingfish ditched it’s bait shop pretence and was in the more lucrative business of serving beer and wine openly.  Eventually, a kitchen was added to serve lunch and according to some old reviews that are framed on the wall the shrimp sandwich was particularly amazing.5 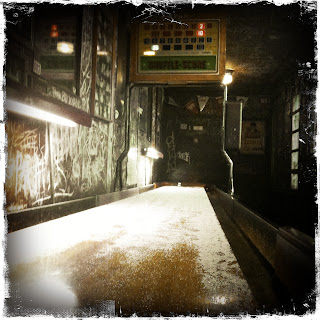 A historian’s note that is so obvious that it almost isn’t worth stating, except that it is: Dates are particular fuzzy when it comes to bars.  Not because they are run and patronized by people who enjoy the drink, but because almost all businesses are not operated under the assumption that they will one day be considered historical.  This is even more true of businesses operating in a time of much less stringent bureaucracy.  And then doubly true of a business that was forced to operate semi-illegally under the Volstead Act.  So I’m starting to get the feeling that tracking history of bars is akin to recording Native American oral history or capturing folk songs passed down through generations of hill people.  Somebody is just as likely to tell you the true story of John Henry as they are able to tell you how drinks were served in the backroom of the Kingfish in 1927.
This hazy history is what lies at the heart of the Kingfish’s uphill appeal for landmark status.  The only other bar in Oakland that is considered a historical landmark is Heinold’s First and Last Chance (see my Oct. 27th post) and that is largely due to the bar’s relationship with Jack London.  The Kingfish has certainly hosted its fair share of celebrities, but they tend to be local sports heroes, rather than literary.  Countless players and coaches from the A’s, the Raiders and Cal-Berkeley have made the bar their place to watch a game, despite and because it is not a sports bar.  There is an egalitarian feel to the space that awards equal status to the winner of yearly shuffle board tournament to a star Raider’s lineman to a high school teacher who has put in years worth of stool time.  In the 1990’s former presidential candidate, Barry Goldwater evidently felt he was not awarded the service according to his station and when given a Kingfish shirt, he used it to wiped his mouth6 (who would have thought old AuH2O, one of the fathers of modern reactionary conservatism, would have been a such a grumpy guy?).
The Kingfish has no artifacts like the picture of Jack London learning to read and the Last Chance, but walking in there does have the same effect of stepping in a lost time preserved in amber.  The ceilings are low and along with the walls is covered in pictures, flyers, business cards, ticket stubs, anything somebody felt worthy of attaching to their favorite bar.  The refrigerator and heater are the same since the 1930’s, the benches are from the 1923 Memorial Stadium, there is a popcorn that can’t be more younger than 40 years (and probably has some of the original kernels in it).  The bar room, the shuffleboard room and two bathrooms all stand on different levels.  This old fashion charm was not created or planned, it is simply the result of nobody seeing reason to fix something that wasn’t broken over the last 90 years. 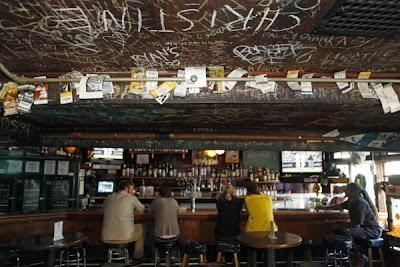 My first trip into the Kingfish to do research as the opposite of productive.  It was my own fault though, I had gotten cocky.  I went in at about eight at night and I brought my wife with me.  Aside from the fact of wanting to enjoy her company, I thought it couldn’t hurt to bring a beautiful woman with me to collect information.  For some reason, though, the female bartender was unimpressed with Dawn’s winning smile.  On top of that, the bartender was very busy serving 24 oz cans of Coors Light to the crowded bar because we came in on a night Coors was doing a promotion with a bunch of girls in skin tight snow bunny outfits.  Further, an old acquaintance of ours was sitting at one of the tables and asked us to sit down.  So rather than get any research done I did the type of “research” everybody assumes I’m doing when I tell them I’m doing a historical bar blog and earned myself a neat little hangover for my troubles.
Two days later I returned alone as soon as the bar opened at four.  Going by myself, I realized, is an elemental part my process.  Bartenders feel compelled to talk to the guy sitting at the bar alone, a couple at the bar asking questions can come off as either amateurish or interrogative.  I had the luck of being the only person in there with the bartender, Dustin, who not only worked at the bar since turning twenty-one, but spent a good portion of his childhood coming in there with his father.  He was just one part of a generational legacy of regulars who made the Kingfish their home away from home.  In the United States these days we tend look down a bit on people spending so much time in the local pub, but in many there countries, and not so long ago here, the pub was a center of the community.  This isn’t a place to just go get hammered, well it can be that, but it is also where one goes because they know their friends will be there.  It becomes part of one’s identity to be a part of this pub culture.  And honestly, at a time when most Americans spend most nights at home, silently sitting next to each other while staring at the TV, there is a lot to be said for people would still rather be among other human beings and have conversations.
So.  Is the fact the Kingfish is a well persevered and functioning time capsule that is beloved by generations of devoted and wide ranging patrons enough to make it a historical landmark?
This is not a theoretical argument.  In the early 2000’s the Kingfish had a run of underage drinking violations and the owner (who Dustin thought was the original owner, but if that was true it would be man of great longevity) was ready to call it quits.  Some legal limbo ensued over the next couple years with the owner’s sisters and a man who wanted to tear down the bar, along with the surrounding houses, to build condos.  At this time the patrons began a bid to the City of Oakland to make the Kingfish a landmark to keep it from being torn down, which was denied.  The “march of progress” was only halted the bursting of the housing bubble and subsequent recession.  Still, the bar sat empty, with everything in remaining untouched, for almost two years, until two of the old regulars came together and bought the bar.  They reopened about four years ago and everybody came back as if the shut down had never happened.7  This was only a reprieve though and the threat of demolition still looms, hence the second, and thus far more successful, bid to make the Kingfish a landmark.  Unfortunately, we are entering the area of pending legalities that I would not be able to report on even if I knew them.  I can tell you that a clipboard sits on the bar with a petition for the city to consider.   There are many pages of signatures from local citizens who can not imagine a world without the Kingfish, but they can definitely use more (nudge, nudge, wink, wink).
notes-
1. Carolyn Jones,  “Landmark status sought for Oakland's Kingfish pub”, San Francisco Chronicle, October 12 2011, accessed  November 10, 2011, http://www.sfgate.com/cgi-bin/article.cgi?f=/c/a/2011/10/11/MNK41LGB81.DTL.
2. Jones, “Landmark status”.
3. Jeff Norman, Temescal Legacies: narratives of change from a North Oakland neighborhood, (Oakland: Shared Ground, 2006), 42.
4. Norman, Temescal Legacies, 1.
5. Dustin Hughes (Kingfish Pub bartender) in discussion with author, November 10, 2011.
6. Jones, “Landmark status”.
7. Dustin Hughes in discussion with author.