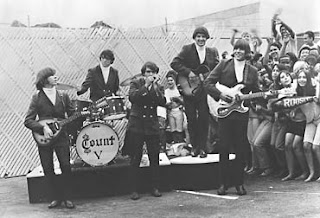 The Count Five from San Jose are the quintessential mid-60's garage rock 'n roll story.  Five California suburban teenagers who picked up instruments trying to sound like British rockers who were trying to sound like black Southern blues men and then coming up with something new, raw and in it's own genre we now call garage rock.  Hardly before the band even had a name "Psychotic Reaction" was a hit song in 1966 and the band was signed to a record label who rushed them into the studio to quickly write and record an album full of mediocre songs that were not nearly on the level of their single.  By early 1968, the members of The Count Five wisely decided going college was a better bet than to vainly pursuing rock stardom and they called it quits.  If not for being preserved in the memory of true and great record geeks like critic Lester Bangs and Lenny Kaye, who compiled the Nuggets compilations of garage rock, the Count Five would have been lost to history and never passed to the younger generations of record geeks like myself.

I knew I wanted to spend my life doing history right about the same time an Audi almost ran me over in a narrow Barcelona alleyway.  My wife, of only three days at that moment, and I were on a brown brick street that was only about six feet across.  Every street in the orderless maze of a neighborhood looked exactly the same and none were labeled with street signs.  All the buildings were similar and unremarkable except for the fact that they were between seven or eight hundred years old.  I was staring up at the buildings, dumbfounded at the generations of lives carried out in these buildings, contemplating the drastic waves of change in those lives over generations that would have crept so slowly to an individual’s naked eye, realizing that history is not just something that happens to people, it is their opinions, beliefs, desires, what they consider possible of the universe itself.  I was wrapping my mind around that Barcelona predates Christ, but is also the same city described in George Orwell’s Homage to Catalonia, with these buildings, draped in the red flags of communists, black flags of anarchists, seething with revolution and grand ideals of creating better society.  Two different worlds, separated by millennia, but on the same soil and somehow I was now there as well.
Just then, as I was having my mind blown, the black Audi came around the ninety degree corner, somehow at fifty mph, straight out of a Bourne movie and barreling down on me.  There was no room to even flatten against the wall on one of those streets.  At the last moment my wife grabbed the back of my shirt and pulled me into a doorway.  I could feel the wind as the rearview mirror jet past where my crotch had been a second earlier.  We popped our heads out to see if there was somebody in fact chasing the Audi.  But everything was clear and quite, once again as if we were standing outside time.
“That was crazy,” Dawn finally breathed out.  “That guy didn’t give a shit!”
“No, he didn’t,” I admitted.  “Kind of awesome though.”
“That you almost were killed?”
“No, that he is so used to these streets that he does that through them.”
She gave me a look, a mix of love and sympathy, that I’m very familiar with now.  It is a look that says, Really?  Are you really that big of a history nerd?  Then she just sighed and said, “This all isn’t history for him.  To him, it’s just normal.”